The Villains Make The Story

This year DC Comics started something new. They redid every major comic from the view point of the villains as a kick off to Forever Evil. This served as a New 52 introduction to the Crime Syndicate. And as we know with every new introduction is a chance for collectibles gold.

Over the next 6 to 12 months DC Collectibles will be releasing a whole slew of Super Villains figures from Captain Cold and Joker to the Crime Syndicate itself with Ultraman and Superwoman. Villains figures are usually under produced, especially the more obscure villains. So this makes for a great opportunity to stock up on the rogues gallery.

With this new direction and take on the characters I for one am very excited.  The villains are always the most interesting part of the story. They add depth and despair to the hero as well as set up epic battles and mind boggling mysteries.  From figures to statues I am excited to see what other new villains we will see leap off the pages of comics into my display case. What villains do you want to add to your collection?

So NYCC came to a close a few days ago.  I don’t know about you all, but my twitter feed got overloaded with news from NYCC, whether it was manufacturer news, cosplay pictures, artist interviews, etc., there was always something to keep up with.  The things that stood out to me for JMD Retail were some of the announcements from two of our favorite manufacturers – Kotobukiya and DC Collectibles.

Kotobukiya revealed the Aquaman Justice League New52 statue.  This is the fourth statue from the Justice League series, which is proving to be very popular so far.  Also, Mass Effect also got some attention with the new ArtFX Commander Shepard statue.  Probably the piece that I’m most excited about is the Killing Joke Joker ArtFX statue.  Maybe I’m just a sucker for the Joker statues, but the color and pose on this one look like it will be pretty impressive.  I’m definitely looking forward to seeing this one in person!

DC Collectibles announced the next line of the Arkham City figures, which will include a new Batman, Talia Al Ghul, and Nightwing.  Also, the DC Comics Bombshells statues line of female heroes was announced.  The most exciting news from DC in my opinion is the Superman statue line.  This series is going to features statues from respected artists, similar to the Batman Black and White statue.  The first few statues were revealed, and I am excited to see where DC goes with this series, as there are so many possibilities.

What did you think of these pieces?  What news caught your attention from NYCC? 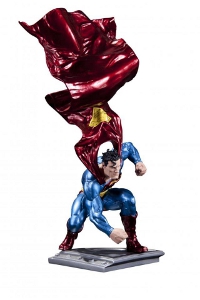